Hyderabad is made of Great

I am a north Indian born in Patna, Bihar . Spent my childhood in various cities of India like Patna , Gangtok , Cuttack . Then after my marriage I came to Secunderabad , and it seemed I have reached a different world .  A metro city with  both metro and Indian culture .On weekends we use to come to Hyderabad either for shopping or to meet our relatives .  Stayed there for one year then stayed few months in Mumbai , then two years in Noida but I always wished we could move back to Hyderabad .Finally I asked my husband to request for a transfer to Hyderabad in his company (if its possible ) as I wanted to come back to Hyderabad .
And when he got approval to join his company's Hyderabad branch I was on cloud9 .
The reason I like Hyderabad so much is  , its made of great , Great people , great culture .
People of Hyderabad are decent , humble , friendly and accept  people from other states  as their friend , unlike many north Indian state where one feels like alien .
Law and order situation in Hyderabad is much better than other cities of India.
One can freely move any where even during late hours in night .
Some ten years back when I was new to this city , I used to fear while going out late in the night for any functions or parties but my husband assured me that there would not be any problem here and he was right , At times I was wearing many gold jewelleries and we were on bike still I never felt that its unsafe . Some thing which I could not imagine in any other city of India even my native place Patna .
So this was some thing new for me , I agree things have changed now , we read many cases of chain snatching in Hyderabad but earlier it was not like that .
Hyderabad has a rich culture of both Muslims and Telgu's .
Few decades back it was ruled by Nizam so people still do maintain that Nizami Tehzeeb , manners and ettiquetes .
Lavish weddings with delicious food , Great collection ethnic wear and all sorts of jewellery to suits every ones budget .
The best part is people live in Peace and Harmony with each other , something which is need of the hour .
Both Muslims and Telgu's respect each others traditions and cultures and there is hardly any conflict for anything .
One can see this from their food culture also .
In many Muslim families people have south Indian breakfast like Idli , dosa ,  upma etc.
Where as Hyderabadi Biryani has found its way in Telgu  families also .
Festivals are celebrated together , like Eid is for every one , every one asks for Sheer Khurma and on Makara Sankranti even Muslim youths and boys enjoy Kite flying.So I really love this brotherhood shown by people of all community .
So one really feels safe staying in Hyderabad which is the Birth right of all .
So I would say Hyderabad has the Drive to keep people motivated to stay together .
It helps people to Connect with each other and connect with Indian tradition and culture something which is fading in other Metro cities of India , there is more Westernisation .Where as in Hyderabad there is more of Indianisation. 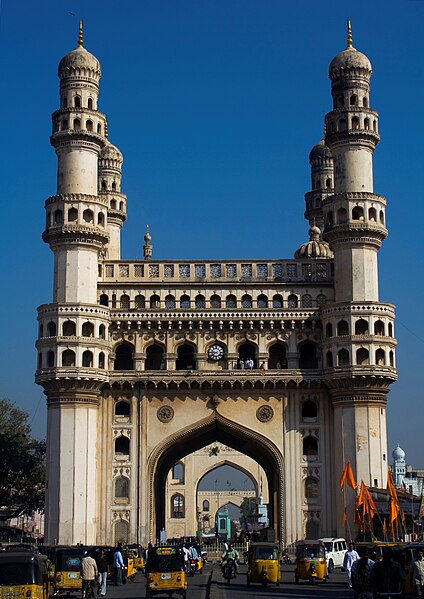 With in the same city one can get  two totally different  worlds.
At old city of Hyderabad near Charminar area one can see old buildings , hospitals built during Nizam's  time , local people mainly traders and their families , ethnic wears , bangles , biryani's etc.
So one gets the feeling that one is in India .
Where as when one goes to Hitech city at Madhapur , one can see high rise buildings , MNC's , IT companies , IT and  BPO professionals , wide roads ,  shopping malls, so one gets the feeling that this is some other part of the world.

I enjoy going both , some times old city for shopping and some times Hitech city and its malls for weekend outings .
So various different cultures and traditions have beautifully merged to form a Hyderabadi culture which is loved by all .
So I really feel Hyderabad is #made of great .
Great  City with Great People .
And I am sure after staying here for some time , no body would ever want to go any where else , even their native .
So according to me and many others Hyderabad is One of the Best City in India .
The city which gives opportunity to every one to do some thing , earn something good , so we find people from other states coming here for education and job.
City which has the Design to accommodate  Old as well New lifestyles of people ,
City which has the Drive to motivate people to do something good for themselves and for others,
City which Connects old tradition with new culture and Connects people of different religion , places and countries to stay together happily.
We can even see people from other countries coming here for education and job .
In various schools one can find students of foreign nationals like from Iran , Somalia , Sudan etc.
In colleges and Universities again there are many foreign nationals specially in the famous Osmania University .
So every one has found a place in this city and lives with Dignity .

I am writing this post in association with Tata Motors #madeOfGreat  activity .
For more details  check this site
http://madeofgreat.tatamotors.com/