SUMMER OF EMOTIONS WITH ZEE5

Summer vacation is the time when we have ample
free time and we love to relax and watch our favorite
shows. This time due to Lockdown Summer Vacation
started a bit earlier and now after spending two months
inside their home people are running out of ideas to
keep themselves engaged.


ZEE5 brings the Summer of emotions for its viewers.
There are some excellent shows and dramas which
one can watch and enjoy it. 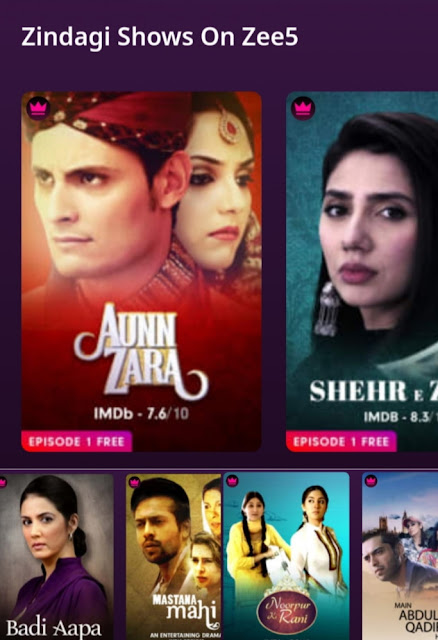 1. Aunn Zara
Aunn Zara is the story of a married couple Aunn&Zara
who are spoiled by their respective families. Destiny
brings them together and they make a cute couple
whereas Zara was bolder than Aunn and Aunn was
over pampered by his mom, grandmother, and aunt.
Maya Ali as Zara has done a great job and Osman
Khalid Butt as Aunn is cute.
I watched this Drama some time back and I totally
loved it.
I watched all episodes and would recommend others
to watch it who like to see light comedy and family
Drama.

This is an Urdu Romantic Drama starring famous
Mahira Khan and Mikaal Zulfiqar.
Falak ( Mahira Khan ) was a daydreamer and only
child of rich parents.
She was a student of fine arts who makes sculptures
of a man of her dreams. She finds Salman(Mikaal
Zulfiqar) matching her sculpture and she gets married
to him.But sadly was not treated well by her husband.
A tragic incident tears her apart from Salman and
brings her closer to Almighty.

So this is a kind of Spiritual Love Story.
Sounds interesting and different, watch it :)

This is a family drama starring Savera Nadeem as
Zubeida and Noman Ejaz as Farman.
Zubeida plays the role of badi aapa ( elder sister),
the main character in this drama.
Zubeida dominates her husband and tries to control
her daughter Sharmeen's life but is unsuccessful.
Zubeida and Ghazanfar loved each other before
Ghazanfar married Zubeida's
sister Firdous. When Zubeida finds out about
Farman's second wife, he decides to divorce her.

There are lots of twists and turns in the story, to know
more watch it on ZEE5 :)

This is a story of an expat girl living abroad falling in
love with a man who is of her father's age. And also
of a politician's son who is forced to marry a child
bride and gradually he falls in love with her.
Starcast: Fahad Mustafa as Adal Soomro
Mehreen Raheel as Aaleen ( Second wife of Adal )
Sajal Ali as Suhaai ( First wife of Adal )
I have watched some episodes of this Drama,
which was interesting as Mehreen first dated
an old man then fell in love with Adal and married him.
Adal is trying to balance his relationship with both his
wives.
Yet to see till the end to know what was the ending.
Do watch it out :)

This story is about a poor girl Noorie (Played by
Sanam Balooch) who accidentally lands into a
rich palace which has an old man and his daughter
after a little hesitant Noorie was accepted by them
and is given good care in terms of education and
manners.
Now, this makes an interesting plot and I would like to
watch this :)

Main Abdul Qadeer Hoon is the story of a boy Abdul Qadeer ( Fahad Mustafa ).
He is an obedient son but his parents are too busy in their own lives.


He befriends a girl in neighborhood Zareen ( Alishaba Yusuf ) who is a spoilt and fast girl and he gets into smoking and drinking. After which he was sent to England by his mom.


There his life changes a lot and he was inclined towards religion and now wants to be a religious scholar. When he returned to his homeland he was a changed person with a cap and beard.


His mom was surprised to see this and after some twist and turns finally, he got married to Zareen .


So these dramas are family drama's and one could really connect with the characters.


And a good source of entertainment during this Lockdown period.


One can watch these at ZEE5


One can watch ZEE5.com watch many more such Dramas and Series.


Zindagi Shows
#SummerofEmotions
If you have watched any of these, do share your opinion about these shows in the comment section below.
One can my previous post to know how to get Free ZEE5 subscription from Airtel & Vodafone
Get Free Zee5 Subscription